On Monday, I mentioned Kathi Appelt’s presentation at SCBWI OK, and how she urged us to show emotion in fiction through endowed objects. First, however, she asked us to brainstorm what our own endowed objects might be.

I must confess I struggled with this. I mean, I LOVE things. I enjoy collecting them and displaying them and petting them. But which ones were endowed with a special emotional significance or power? Which ones would I collect in an imaginary treasure chest of Sonia-ness?

When she asked us to think of objects that conveyed something about a relationship, I was finally able to unblock myself. I thought of my husband Steve. And no, I didn’t immediately think of my wedding ring or some other bit of jewelry. Instead, I thought of a teacup. 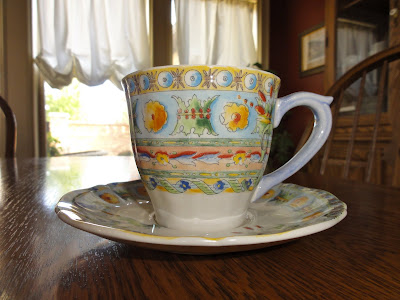 This teacup. The one that he made a special little trip to search out for me, without my urging, when he was in Milwaukee (the city in which we were married). He knew (and still knows) that I love to collect teacups. He knew that I love Medieval/Renaissance/European designs. So he bought this cup and saucer as a special gift for me. Can I say again that he did this without ANY prompting? 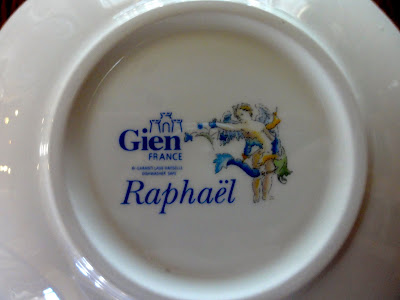 I think he looked at the bottom of the saucer and KNEW. I mean, this stamp just makes me giddy! It’s so ME.

And thus, this cup and saucer is the pride of my collection AND automatically goes into my imaginary treasure chest of Sonia-ness (as well as Sonia♥Steve-ness).

Okay, so what about endowed objects in fiction? In The Revenant, Willie arrives at the Cherokee Female Seminary with only a small bag of things, but some of them are endowed objects. A three-volume set of Shakespeare’s plays might be the most significant. These books are practically all she has left of her beloved father, a man whose obsession with the theater proved the financial ruin of her family. Two of the books contain endowed objects within their pages — her only photograph of her father, and a letter from her mother. The latter launches the very plot of the book.

Funny how it was easier for me to think of an endowed object in one of my stories than within my own life. 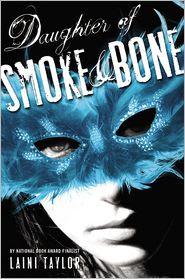 I read another story recently — Laini Taylor’s Daughter of Smoke and Bone. Wow, ya’ll. You know when people say “their love was so epic”? Well, the romance in this novel truly is epic. In the past, I never was drawn to stories of angels and monsters and protagonists who are so achingly beautiful that it hurts to look at them. That stuff was just too much for me. Too over-the-top. This novel is over-the-top, but in a really good way. The writing is exquisite. And like I said, the story (and romance) are epic. It also contains an endowed object — many, in fact — but the one I’m thinking of has a profound meaning that is revealed in layers throughout the story. (I might be talking about the “bone” part of the book’s title.) I want to thank sweet Sara at Novel Novice for passing the ARC along to me!

Now I’d like to pass it along to one of you. Sure, the hardcover will be out at the end of this month. (Amazon says they’re stocking it on Friday.) You could buy it for yourself. But this copy is FREE! And I’ll mail it anywhere in the world! (Also, it has a different cover from the published version, which I think makes it sort of collectible.) I’ll throw in some Novel Novice swag, some Elevensie swag, and heck, why not throw in a signed copy of The Revenant? (Both books feature revenants, by the way!) If you already have a copy of The Revenant but still want to win Daughter of Smoke and Bone, I’ll throw in something else to sweeten the pot. Something good, I promise.

All you have to do to enter is to comment with details of an endowed object, either in your own life or in a favorite story. This giveaway is open internationally. Just make sure you leave a name and check back on Friday to see which name was drawn!