December Tea and a Book: The Santa Klaus Murder, by Mavis Doriel Hay, with additional recommendations

To round out this year of fiction by early twentieth century English women, I offer a holiday mystery!

The Santa Klaus Murder, by Mavis Doriel Hay — Synopsis from the publisher:
Aunt Mildred declared that no good could come of the Melbury family Christmas gatherings at their country residence, Flaxmere. So when Sir Osmond Melbury, the family patriarch, is discovered—by a guest dressed as Santa Klaus—with a bullet in his head on Christmas Day, the festivities are plunged into chaos. Nearly every member of the party stands to reap some sort of benefit from Sir Osmond’s death, but Santa Klaus, the one person who seems to have every opportunity to fire the shot, has no apparent motive. Various members of the family have their private suspicions about the identity of the murderer, and the Chief Constable of Haulmshire, who begins his investigations by saying that he knows the family too well and that is his difficulty, wishes before long that he understood them better. In the midst of mistrust, suspicion and hatred, it emerges that there was not one Santa Klaus, but two.

My thoughts:
This is a standard country house mystery with a large cast of characters/suspects, plenty of upper class snobbery, and to a lesser degree, the clash of values between landed gentry and working class folk. It reminded me of Gosford Park, but with less humor and nothing very sexy going on. That said, I did enjoy the puzzle of it all, and how the Chief Constable carefully weighed the evidence provided by family members. (The Chief Inspector, to no one’s surprise, is rather useless.) There is a very good recording of the book on Audible. However, I found it handy to have the book nearby so I could refer to the lengthy list of characters while listening.

About the author:
Mavis Doriel Hay published three mysteries. One of them, Death on the Cherwell, is set in Oxford. (In that same year Dorothy Sayers published Gaudy Night!) Hay attended St. Hilda’s College in Oxford, and thereafter she worked with the Agricultural Economics Research Institute of Oxford University, surveying rural industries of England and Wales. In addition to mystery novels, she wrote several books about rural women’s crafts.

And now for TEA:

Today I’m recommending a little spice with Chocolate Chili Chai from DavidsTea, paired with a chocolate chip shortbread from Shortbread House of Edinburgh (purchased from Amazon). Easy and delicious! 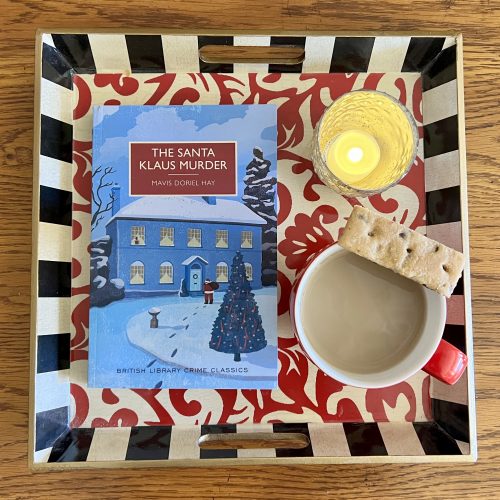 Classic options:
Christmas Pudding, by Nancy Mitford (1932)
High Rising, by Angela Thirkell (1933)
A Christmas Party (aka Envious Casca), by Georgette Hyer (1941)
An English Murder, by Cyril Hare (1951 — the only gentleman in this list!)
Christmas with the Savages, by Mary Clive (1955)

Stay tuned for my recommendations for Christmas novellas! (All of which are available on Audible — perfect for that drive home for the holidays.)