Two years ago I posted on my Livejournal blog about Cedric almost eating two baby bunnies. Fortunately I was able to pluck the bunnies from his evil maw, and the very next day I photographed them nursing on our back patio.

This year we have another bunny mama and her brood, this time on the front patio. I have a better camera now, but the babies are still a little too small to run around in the open. Instead the mama keeps them hidden away in a little burrow she made in our ground cover. 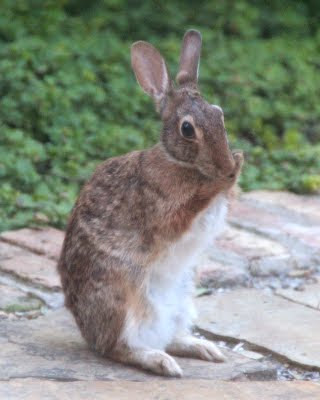 I took this not-so-great photo of the mama a few days ago while she was grooming herself. Steve swore he saw her nursing the babies, but when we went out there for a closer look, I could find no evidence of them. (Don’t worry, we’d never disturb the nest if we found it.) 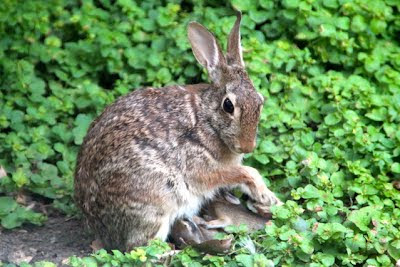 Last night she appeared again, and this time I got photographic evidence of the babies! 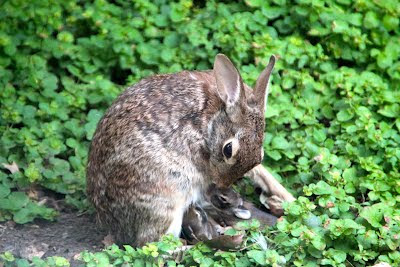 You can sort of see their little heads here. I’m pretty sure there are three of them.

After she finished nursing them, the babies sank back down into their burrow, and the mama spent quite some time arranging the moneywort and mulch so that it would all look tidy and entirely NOT like a baby nest. (She had such fabulous little monkey paws!)

I will update as the babies get bigger. I’m assuming at some point they’ll come out and nurse on the flagstone like the other babies did two years ago.

P.S. For the life of me I don’t understand why these photos won’t embiggen when you click on them. I’ve tried everything and it’s nearly driven me INSANE. Help?