Brontës on the Brain

I finished a first draft of my latest project, which had been dragging on FOREVER. The ending is a bit sketchy, but at least I have something to work with, so YAY!

I am very good at rewarding myself for finished tasks, and this weekend was no exception. Friday night, I re-watched Cary Fukunaga’s Jane Eyre (2011), my favorite of all the adaptations. 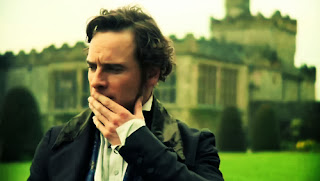 It’s no secret that I adore Michael Fassbender. He’s probably too handsome for this role, but he has such a lovely intensity. And he can be ugly when the situation requires it. I love the early scenes with Jane in which his face tightens, his mouth flattens into a sneer, and his eyes flash with contempt for the world. 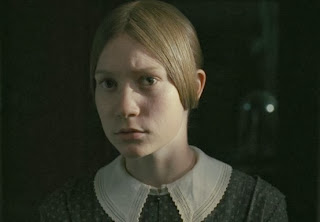 And Mia Wasikowksa is appropriately small and plain, but also projects the necessary fierceness. It is only in this adaptation that I fully experience the seductiveness of Rochester’s attention to her, and the tragedy of having to walk away from the freedom, inspiration, and affection offered to her at Thornfield. 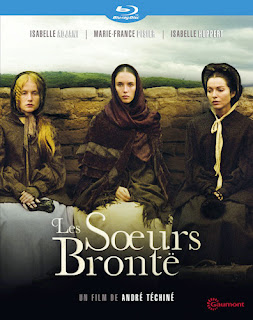 I also watched Les Soeurs Brontë (1979), which has become available on US DVD only recently, as far as I can tell. (I bought it on Blu-ray.) It’s a beautiful film, shot partially on location in a way that capitalizes on the wide, bleak vistas of the Yorkshire moors. 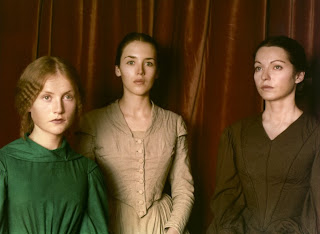 I’d gathered in advance that the film was more about Branwell than the sisters, but I still found myself resenting the time devoted to his addictions and failures. In the documentary that accompanies the feature film, the director states outright that “in the final version of the film, it’s like a vampire story, if you will, or virgin-vampires, in a way, who appropriate and accomplish the artistic destiny of their brother.” BLECH! One could argue that Branwell was the one with the most external conflict, the most drama, and that his life translates better to the screen. As Claire Bazin says in the documentary, the imaginations of the sisters “were fertilized and developed by an interior richness, by their internal life.” How do you represent that rich interior life on film? I don’t know. What films have effectively represented the dramatic interior life of a writer?

(And anyway, the sisters did have dramatic lives–traveling to Brussels, opening their own school back in Yorkshire, governessing for crazy families, etc.) 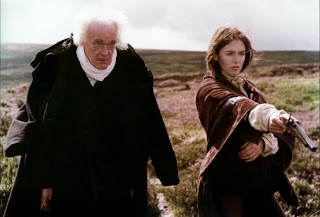 Surprisingly, Emily Bronte was my favorite character in the film, and it wasn’t just because (in this incarnation, at least) she liked to roam the moors in trousers and shoot guns. She was strange and passionate–a true brooding heroine. I never knew or had forgotten that the titular heroine of Charlotte’s Shirley was based on her. I am not a fan of Wuthering Heights or Emily’s poetry, but I think I would watch the heck out of a film that was mostly about her. Isabelle Adjani was absolutely mesmerizing to watch (and you can bet I’ll be watching La Reine Margot and Camille Claudel ASAP).

I need to watch again, but for now my verdict on Les Souers Brontë is that it’s a must-watch for obsessive Brontë fans, but may also be of interest to French film buffs. The cinematography is gorgeous.

In other news, I hope something comes of this notion of a BBC Brontë biopic (mentioned in 11th paragraph).