Even if you’re healthy and safe at home, you may be losing your mind right about now. I’ve put together a list of things (in no particular order) that might brighten your mood during this surreal quarantine from the rest of humanity.

— First of all, complete your 2020 Census! It may not be a cheerful activity, but it doesn’t take long and you’ll feel a sense of accomplishment when done.

— Please visit Sampy and friends in Finland. Seriously, CLICK THAT LINK! You can’t help but cheer up when you see Sampy, Hiskias, and Elmeri cavorting in the snow. They are magical creatures and they always fill my heart with joy.

— Pre-order The Jane Austen Society. Yes, there’s a new Austen-themed novel coming out, and Richard Armitage* is reading the audiobook! The Jane Austen Society by Natalie Jenner, with starred reviews from Booklist and Library Journal, is “a fictional telling of the start of the society in the 1940s in the village of Chawton, where Austen wrote or revised her major works.” Doesn’t it sound lovely? Speaking of sound, here’s a snippet of the performance by Armitage. The novel releases on May 26 in the U.S.

*NOTE: If you’re a fan of Richard Armitage’s voice, check out all the Audible books he has narrated. I was gobsmacked!

— Listen to Shedunnit, “the podcast that unravels the mysteries behind classic detective stories.” The latest episode is about Peter Wimsey and Harriet Vane, and thus of particular interest to me, but there’s much more you’ll wish to explore.

— If you’re a fan of Hallmark movies, particularly the Christmas ones, fill out the Merry Madness Christmas Bracket. You can create up to 10 brackets and maybe even win some cash. This form of March Madness may not be as exciting as the NCAA basketball tournament, but it’s a nice distraction.

–ALSO, Hallmark’s Spring Fling starts March 28. In the meantime try to catch a repeat of In the Key of Love or watch it online. We loved it.

— Reorganize your tea cabinet. (Or any cabinet/drawer that contains magical things but has become untidy.) Trust me, it feels SO GOOD. I started with my tea cabinet and then moved on to every cabinet in the kitchen. But really, I only moved on to the other, less interesting cabinets because I was still on a high from tidying my teas. Check it out:

–Watch Schitt’s Creek on Netflix. It’s adorable, but you do have to give it a couple of episodes before you connect to the characters. This show makes me so cheerful, and sometimes (more often in later seasons) it’s so poignant that it makes me cry. Another great option: Playing House. This is my ultimate comfort show. I have downloaded all three seasons to my phone, and I often watch it on airplanes when the turbulence is rattling me. Maggie and Emma are a lovable pair of friends, and the actresses are besties in real life.

— Read the Ruth Galloway mysteries by Elly Griffiths, or download the audiobooks from Audible.com. This incredibly appealing series of cozy mysteries will distract you from the harsh realities of our world. (Or just save you from boredom.)

— Make cocoa with marshmallows. I love this recipe from Epicurious.

— Take a long walk. It’s good for your body and will clear your mind. If the quiet streets freak you out, go home and drink more cocoa.

— Work a puzzle. There must be at least one of them lurking in a closet somewhere.

— Meditate. I like the guided meditations on the Calm App. They have wonderfully soporific sleep stories, too, if you’re having trouble falling asleep at night.

— Learn. Surely you’ve seen the ads for a free month of “The Great Courses” online? Go here for more information.

— Start or end your day with journaling. I’m addicted to this practice, and it has become my morning therapy. If you have no idea where/how to start, google “journal prompts” and you’ll find endless lists of questions and suggestions. As I’ve mentioned before (here, for instance), I love the journals from Paperblanks. But any old notebook will do.

— ETA: If all else fails, watch this: Coronavirus Rhapsody

Dear reader, I meant to offer a “Tea and a Book” recommendation for June, but there was just too much to do in preparation for travel. I will try again later this month. In the meantime I thought I’d start a new feature on the blog — “Literary Walks.” I love to follow in the footsteps of authors and view the inspirations for their settings and conflicts. Who knows, perhaps I could collect enough material for a guidebook? We’ll see how it goes.

Today’s post is inspired by a setting shared by four of my favorite novels.
(Each image is linked to Goodreads)

Lyme Regis lies on the Dorset/Devon border in the south of England. I’ve borrowed a map provided by The Alexandra Hotel to help orient you to the town. (Just so you know, The Alexandra is a lovely place to stay, with two restaurants and numerous rooms that overlook the sea. They also offer a glorious afternoon tea.)

I suggest starting your walk on Silver Street at the Mariner’s Hotel, which once was known as Morley Cottage. Elizabeth Philpot, an enthusiastic fossil hunter featured in Tracy Chevalier’s Remarkable Creatures, lived here with her sisters. Continue on to Broad Street, the main shopping area, and browse the shops–you’ll find clothing, hiking supplies, jewelry, art, fossils, and more. You also might fortify yourself at one of the many restaurants.

Then walk along the Marine Parade to the stone jetty known as the Cobb and take special notice of “Granny’s Teeth,” the little steps that silly Louisa Musgrove leaps from in Persuasion. While on the Cobb also think of the mysterious Sarah Woodruff, the so-called “French Lieutenant’s Woman,” standing alone and staring out to sea in a way that thoroughly captivates Charles Smithson. Make time to visit the Lyme Regis Museum, formerly the site of Mary Anning‘s shop, to learn about the Jurassic coast as well Lyme’s history and literary connections.

There are at least two fine beaches for fossil hunting, but do keep the tide tables in mind. Monmouth Beach (see at the lower left on the map above) is always a good bet, and you can imagine yourself Mary Anning or Elizabeth Philpott as you search for ammonites and other specimens. This page gives all the details on Lyme’s beaches.

For me, the most intriguing aspect of Lyme Regis is the Undercliff. I will Let John Fowles explain in this passage from The French Lieutenant’s Woman:

There runs, between Lyme Regis and Axmouth six miles to the west, one of the strangest coastal landscapes in Southern England […] People have been lost in it for hours, and cannot believe, when they see on the map where they were lost, that their sense of isolation–and if the weather be bad, desolation–could have seemed so great.

The Undercliff–for this land is really the mile-long slope caused by the erosion of the ancient vertical cliff face–is very steep. Flat places are as rare as visitors in it. But this steepness in effect tilts it, and its vegetation, towards the sun; and it is this fact, together with the water from the countless springs that have caused the erosion, that lends the area its botanical strangeness–its wild arbutus and ilex and other trees rarely seen growing in England; its enormous ashes and beeches; its green Brazilian chasms choked with ivy and the liana of wild clematis; its bracken that grows seven, eight feet tall; its flowers that bloom a month earlier than anywhere else in the district. In summer it is the nearest this country can offer to a tropical jungle.

I love these images of Sarah in the Undercliff from the 1981 film.

If you’d like to know more, here is a more detailed description of one woman’s trek from Lyme Regis to Seaton through the Undercliff. As for us, it took a little over four hours to get to Seaton (including time for photos and a lunch break). Of course, you don’t have to walk the entire thing. I do, however, recommend a particular diversion off the main path that I learned about while reading Penelope Lively’s Whitbread Award-winning A Stitch in Time. In the book, the Lucas family invites Maria Foster and her parents to a “proper beach” that can only be accessed from the Undercliff path. The way proves precarious:

Maria put one foot slowly and carefully in front of the other, steadying herself with a hand on a sapling or jutting rock where possible. Once she skidded on some treacherous shale that slithered under her shoes, so that she sat down hard, bruising herself. It could have been worse. Below and out of sight, hair-raising cries from the other children suggested fatal accidents of one kind or another. […] At last they were all down and there, as promised, was a beach. Though not, at first sight, a beach very much different from any other except that, also as promised, there was no one else in sight.

In 2015 Steve and I found that beach, and Lively did not exaggerate the difficulty of the descent. But it was all worth it when we found what I now call “the secret beach” and enjoyed it all on our own for quite some time. (Yes, that rocky beach is tough to walk on, but the feeling of utter isolation in this magical landscape more than compensated for the strain on our ankles.)

Well, that’s at least a full day of walking for you when you visit Lyme Regis! Other things you might do that aren’t particularly literary–walk to Golden Cap, have a nice bathe in the sea (cold but so refreshing!), rent a kayak, go fishing for mackerel, and much more. Click here for more information.

I’m hoping to offer one more Literary Walk before we return, so please stay tuned!

Last Tuesday, I had the pleasure of spending an afternoon at Dragonmoon Tea Company with friends Brandi, Michelle (who was visiting from Tennessee), and Ange. This was our third year of taking tea together in Tulsa. May the tradition go on and on! 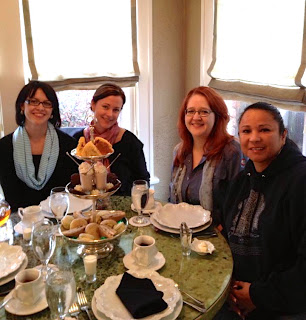 Click here for a closer look at the tea tray: scrumptious scones, sandwiches and sweets!

This month’s tea recommendation: During our visit I enjoyed more than one cup of Organic Irish Breakfast from the Metropolitan Tea Company. (Follow the link to order from the charmingly named Tweed & Hickory Loose Teas.) 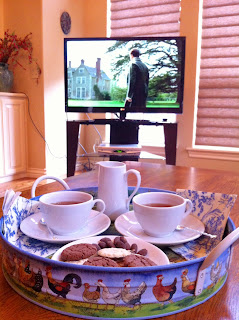 Michelle and I also enjoyed tea during our marathon of Jane Austen adaptations (inspired by our obsession with the Lizzie Bennet Diaries). We watched Pride and Prejudice ’95, Emma ’09, and Persuasion ’07*. Can you identify the film we’re watching in the above photo? 🙂 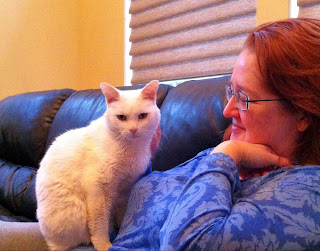 Cedric always joined us for tea, but he preferred Michelle’s company to mine. As a keen lapstalker, he knows a cuddly warm napping spot when he sees it!

*Speaking of Persuasion, I would love to indulge in a fantasy casting of a new, let’s say, three-part BBC adaptation, but perhaps that’s best for another post? I’ll still take suggestions in the comments below. Persuasion really should be given the screentime it’s due, don’t you think? I’m raring for a re-read.