1. Giveaway — better late than never, but I’m finally announcing the winner of THE DARK BETWEEN blog tour contest. Congratulations to:

Heidi Davis — a package of goodies will be coming your way very soon!

2. The Sound of Music — I’m rather annoyed with myself for having missed NBC’s live production last night. I’ve never seen the Broadway musical, and I’ve certainly never seen NBC do anything this risky or interesting. Seems like the reviews are mixed. What did you think? Did it put you in the Christmas spirit?

3. Speaking of Christmas — my friend Shel has featured a stocking stuffer extravaganza on her blog all this week. Check it out! She has compiled roughly a bazillion ideas for filling your stockings. 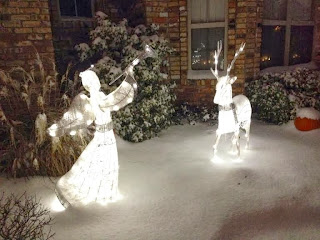 It’s not a blizzard, by any means, but it’s enough to shut things down in these parts. The house is dark and quiet–even the cat is sleeping in–but I had to get out and have a tromp in the snow.

5. Death Comes to Pemberley — here’s the first trailer for the BBC adaptation:

I didn’t really enjoy the book, but I’m certainly game for a TV adaptation. (Chatsworth! Anna Maxwell Martin! Cravats!) The tone seems terribly dark for Austen, but of course I’ll watch whenever it makes its way across the pond. Will you?

Have a wonderful weekend! 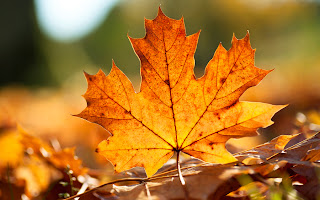 Oh, how I love autumn!

Haven’t done the Friday Five in a while. Today I give you one alarming thing, and four lovely ones. (Actually many more than four lovely things!)

1. The Bechdel Test. Recently I was reading Michelle Cooper’s blog (she’s the author of the much beloved Montmaray Journals), and she mentioned this. You can read more about it here, but it boils down to the question of whether a novel, film, play, etc.: 1) has at least two women in it, 2) who talk to each other, 3) about something besides a man. As soon as I read that I thought HOLY MOLY, do my novels pass? And yes, they do, but I still appreciate the reminder.

Now, to the lovely things:

2. Author visits. I had a wonderful time talking to Choctaw High and Middle School students last week. They asked entertaining, thoughtful questions, and then they pretty much bought me out of books. (That never happens.) And this past Wednesday I met with a book group that has been meeting in Norman, OK, for several decades, and those ladies were so gracious, so fun to chat with, and at the end I was offered the most delicious petit four I’ve ever eaten. ALSO, during both visits I was told some hair raising stories of real life ghost encounters. Marvelous!

3. Middle Grade Books. Two in particular have warmed my heart lately, and they both were recommended by Caroline Starr Rose as part of The GreenBeanTeenQueen’s So You Want to Read Middle Grade? series. With a Name Like Love, by fellow Elevensie Tess Hilmo, is an historical mystery featuring a traveling preacher’s daughter who determines to clear the name of a woman who has falsely confessed to murder. Last night I finished Pictures of Hollis Woods by Patricia Reilly Giff, about a girl who has been in foster homes her entire life. She finds a loving home with Josie, but she yearns for the former family she betrayed. Beautiful books!

4. Feel good movies. This is the time of year when I transition away from that craving for spooky Gothic horror. Instead I want predictable, gooey romance and friendship in a picturesque setting! I already mentioned on Facebook that I’m rather a junkie for Hallmark Christmas movies. I’ll pass on the ones featuring Santa’s wife/daughter/elf/whatever on the loose, but I love the simple and sweet romances like The Christmas Ornament (new this year) and Trading Christmas (2011). Last night I re-watched Enchanted April–I think it’s been over a decade since I’ve seen it–and it was just as magical as always. (Though I wonder how those ladies can endure sleeping on craggy rocks!) Do you have any recommendations for me?

5. Short story anthologies. Last week was the official cover reveal for GRIM, a collection of dark fairy tale retellings edited by the wonderful Christine Johnson. I am absolutely delighted to have a story in this anthology! By the way, I also received two GRIM ARCs in the mail — hooray! I will be plotting their fate in the next few weeks, so stay tuned . . .

The cover, front and back: 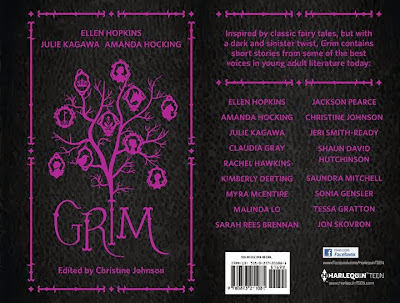 My story, “Untethered,” is a modern interpretation of a little known and very tiny Brothers Grimm story entitled The Shroud. If you read it, you’ll probably understand why I picked it. 🙂

Look for the hardcover release of GRIM in March 2014!