August Tea and a Book: Two Novels from Barbara Pym 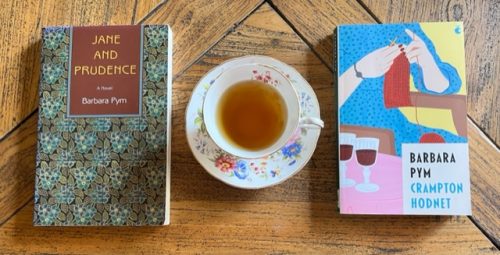 This year my intention was to recommend novels by female authors published in the early 20th century. I veered into mid-century with Dodie Smith and I’m doing it again today with Barbara Pym’s Jane and Prudence (1953) and Crampton Hodnet (originally written in the 1930s but published posthumously in 1985). I trust you will forgive me, especially since most (if not all) of Barbara Pym’s novels have a somewhat “1930s feel” no matter when they were published.

About the Author: Barbara Pym was born in 1913 in Shropshire. She attended Huyton School in Liverpool and later St. Hilda’s College, Oxford. During the war she worked for the Censorship Department in Bristol, as well as the Women’s Royal Naval Service as a postal censor. After the war, she took employment at the International African Institute in London and was assistant editor for the scholarly journal Africa. She published nine novels during her lifetime, and four more were published posthumously.

If Jane Cleveland and Prudence Bates seem an unlikely pair to be walking together at an Oxford reunion, neither of them is aware of it. They couldn’t be more different: Jane is a rather incompetent vicar’s wife, who always looks as if she is about to feed the chickens, while Prudence, a pristine hothouse flower, has the most unsuitable affairs. With the move to a rural parish, Jane is determined to find her friend the perfect man. She learns, though, that matchmaking has as many pitfalls as housewifery.

Ten years ago (when I first read this novel) I might have identified with Prudence and her fixation on London, fashion, and unrequited love. During this reading, however, I found myself squarely in the Jane camp. I particularly love this moment when she wistfully recalls the passion and poetry of her youth.

“I think, darling,” [Jane] said, going into Nicholas’s study just before lunch-time, “it would be better if we had lunch out today.”
Nicholas looked over the top of his spectacles with a mild, kindly look, obviously not having heard what she said.
Mild, kindly looks and spectacles, thought Jane; this was what it all came to in the end. The passion of those early days, the fragments of Donne and Marvell and Jane’s obscurer seventeenth-century poets, the objects of her abortive research, all these faded away into mild, kindly looks and spectacles. There came a day when one didn’t quote poetry to one’s husband anymore. When had that day been? Could she have noted it and mourned it if she had been more observant? (48)

As I was reading about Barbara Pym, I learned that her earlier novel, Crampton Hodnet, featured two memorable characters from Jane and Prudence: the overbearing Miss Doggett and her seemingly mild companion Miss Morrow. It seems these characters were recycled for insertion into J & P and as far as Pym knew, nobody would ever read the earlier manuscript. I happen to love the fact that readers now have two different narratives for Miss Morrow.

Formidable Miss Doggett fills her life by giving tea parties for young academics and acting as watchdog for the morals of North Oxford. Anthea, her great-niece, is in love with a dashing undergraduate with political ambitions. Of this, Miss Doggett thoroughly approves. However, Anthea’s father, an Oxford don, is carrying on in the most unseemly fashion with a student – they have been spotted together at the British museum! But the only liaison Miss Doggett isn’t aware of is taking place under her very own roof: the lodger has proposed to her paid companion Miss Morrow. She wouldn’t approve of that at all.

I quite enjoyed the opportunity to be inside Miss Morrow’s head while reading this book. At first she seems small, deferential, and nearly invisible. We soon learn, however, that she has a spine and would much rather remain single (*gasp*) than marry the wrong man. I’m particularly fond of this moment in which Miss Morrow enjoys standing out among a dreary group of dinner guests.

Dinner was a strained meal and nobody said very much. Miss Doggett darted occasional glances of disapproval at her companion, who seemed unconscious of having done anything wrong. Miss Morrow knew that she was looking nice this evening, or as nice as it was possible for her to look, and she was feeling happy and excited, as one does on an unexpected sunny morning in winter. She realised as she sat eating her boiled mutton and caper sauce — the kind of food calculated to bring anyone down to earth again — that this was a most unsuitable state of mind for the companion of an elderly lady. It was the feeling that had made her plunge boldly among the drab dresses in her wardrobe and take out the new green one, which she knew she ought to be keeping for some special occasion that would never happen.

Let us remember this — don’t wait for the “proper” moment to wear the green dress! Wear it NOW, my friends!

What about tea? We recently had our wood floors refinished, which involved packing up everything in those rooms so it could be taken away to a storage facility. It’s all back now, but we still have a great deal to unpack, organize, and put away. For that reason my tea offering is rather simple — just a cup of Harney & Sons peppermint tea to calm my stomach and help me endure “The Great Unpacking.”

*Both synopses are from Goodreads.

**Did you know there is a Barbara Pym Society? And that they offer meetings and conferences in the U.S. and the U.K.? She’s kind of a big deal! (And you’ll even find Pym fan fiction at this site.)

***Also, there is a newish biography of Pym: The Adventures of Miss Barbara Pym (2021) by Paula Byrne. Here’s a review from The Guardian.

← Previous post: July Tea and a Book (a bit delayed): The Making of a Marchioness by Frances Hodgson Burnett Next post: September Tea & a Book: The Enchanted April & Miss Pettigrew Lives for a Day →