August Tea and a Book & a GIVEAWAY: Ophelia Swam, by Kelley Swain 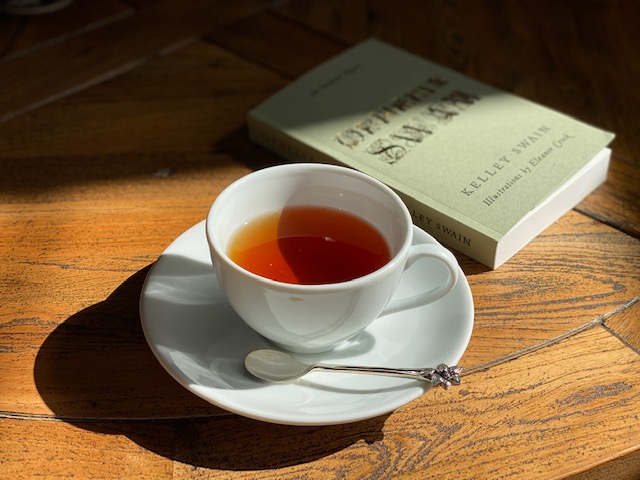 During our many summers in Oxford, I spent a lot of time in Blackwell’s Bookshop — browsing, reading, drinking tea, and sometimes even writing. It’s probably my favorite bookstore in the world because it is enormous, exhaustively stocked, and yet somehow intimate and cozy at the same time. (See photo — it’s even next to a pub!) Blackwell’s carries bestsellers, cool obscure stuff, and everything in between, plus journals and stationery. And more that I can’t even begin to explain. Truly, it is heavenly.

I follow Blackwell’s on Twitter, particularly for the book recommendations, and recently learned of a new novel offered exclusively by them: Ophelia Swam, by Kelley Swain. Blackwell’s offers free shipping to the states, so I ordered two copies. (And after reading the novel I ordered two more!)

What is the weight of the soul?
The cost of redemption?
The meaning of home?

Sister Grace, Infirmaress of Godstow Nunnery, is faced with helping an unexpected guest: a half-drowned young woman, covered in garlands of flowers and herbs.

When the girl proves unusually adept at healing remedies, Sister Grace takes her on as an apprentice. But helping with an emergency amputation turns the girl’s interest from matters herbal, to anatomical, as she is compelled to discover the seat of the soul…

A Gothic romance set in Tudor England’s time of upheaval and uncertainty, Ophelia Swam is an illuminating tale of love, grief, and sisterhood, spanning generations of healers.

My thoughts: I’ve long been in love with Oxford and fascinated by the ruins of Godstow Nunnery (or Godstow Abbey as it’s now called), so I was quite eager to get my hands on this book. To my mind, it actually was two stories. The first featured a nun — a compassionate healer — who saves the life of a young woman in peril. This section is rather quiet, full of the details of a nun’s daily life, but also simmering with mystery. Once the young woman is healed and the nunnery’s inhabitants must face their fate under the rule of Henry VIII, the story transforms into a tale of adventure and suspense, with some romance to boot!

I confess to enjoying the quieter section a bit more, but the story as a whole is lovely, and so refreshingly different, that I really want more people to read it!

NOTE: This novel is only available from Blackwell’s. If you are in the US or Canada, however, you can win one of two FREE copies, each with a bookmark signed by the author, by entering my giveaway. With each book I’ll include a sample of Oxford Breakfast tea from Cardews of Oxford. This tea (featured in the image at the top of this post) is flavorful and mild enough to drink without milk. Very tasty!

Thanks for reading and good luck with the giveaway! Just for fun, here is “Ophelia’s Madness” as portrayed in Slings and Arrows: