April Tea and a Book: The Brontës go to Woolworths, by Rachel Ferguson

April’s “Tea and a Book” continues its focus on the early 20th century by recommending Rachel Ferguson’s THE BRONTES WENT TO WOOLWORTHS.

Rachel Ferguson (1892-1957 — not to be confused with last month’s author, RUBY Ferguson) was a journalist, author, biographer, playwright, drama critic, actress, campaigner for women’s rights, cat lover, and much more. She lived nearly her entire life in Kensington.

The Brontës Went to Woolworths seemed like it could be a fun romp, but I soon learned otherwise. The story IS quite humorous and endearing, but it also throws you into a morass and expects you to sort everything out for yourself. Once I had a better handle on what was going on, I couldn’t put it down. I’m almost embarrassed to admit that five minutes after finishing the book I turned back to the beginning and read it a second time.

The novel features four females living in London — widowed Mrs. Carne, journalist/would-be novelist Deidre, aspiring actress Katrine, and young Shiel, still in the schoolroom. The family thrives on imagination and storytelling, and over the years they’ve made a habit of collecting interesting personalities and creating stories about them. They are in for a surprise, however, when one of these personalities actually enters their everyday life.

I loved this book! There is an e-book version, but I liked having A.S. Byatt’s introduction in my used copy of the Virago edition. 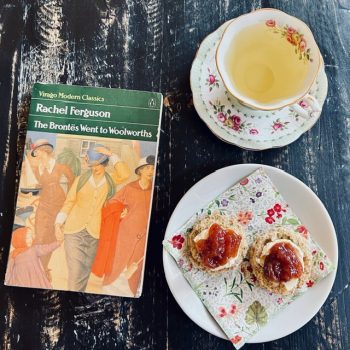 Now for tea: today I offer linden tea, made from the leaves of linden trees (also called lime trees). This delicious tea reminded me of chamomile but with a honey scent and flavor. From the purveyor: “a cup of honey-scented linden flower tea is the perfect way to relax after a stressful day; filled with phenolic compounds, linden flower tisanes have traditionally been used as a soothing beverage for both children and adults.” I served the tea with Irish brown scones (a mix from Odlums) topped with clotted cream and organic strawberry jam. 🙂