I chose one of the easiest of the resolutions discussed earlier: “I will reread a book I loved as a child.” 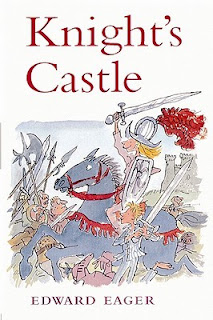 I remember finding Knight’s Castle in the North Stewart Elementary library in . . . 5th grade, maybe? Our librarian never made recommendations, but she let us browse freely, so I’m sure I found it by scanning the shelves.

The first page grabbed me instantly:

It happened just the other day, to a boy named Roger.

Most of it happened to his sister Ann, too, but she was a girl and didn’t count, or at least that’s what Roger thought, or at least he thought that in the beginning.

Part of it happened to his cousins Jack and Eliza, too, but they didn’t come into it till later.

Isn’t that marvelous? It gets even better when the kids magically enter the world of Sir Walter Scott’s Ivanhoe.

I had read a highly condensed, kid-friendly version of Ivanhoe before encountering this book, so I was familiar with the characters. And I remember being so delighted that Roger, Ann, Jack and Eliza were as opposed to Rowena as I was. If you always wished silly Wilfred would get a clue and choose Rebecca, you’ll like Knight’s Castle, too. 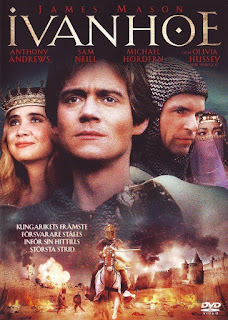 (Here is where I start to ramble.) In 8th grade, a related magical thing happened. Anthony Andrews starred in a TV adapatation of Ivanhoe, and this was when I first learned what it meant to SWOON. Rowena swooned, Wilfred of Ivanhoe swooned, and most of all, I swooned. But you know who stole the show by surprising me with his swoon-worthiness? Sam Neill as Brian de Bois-Gilbert. This might be the first story that helped me understand romantic obsession, and it certainly showed me that bad guys could be sexy and tragic even if you knew it was wrong for them to get the girl. Oh my!

I know for a fact I went back to the library and checked out Knight’s Castle again after watching the TV movie, only I had to be stealthy about it because it was a “kid’s book.” The second reading was even more rewarding! And years later, after reading the full text of Ivanhoe AND teaching it to Orthodox Jewish girls (what?), I used my indie-bookstore-employee magic (these were pre-Amazon days) to track down a copy of Knight’s Castle along with four other Edward Eager books. YAY! (Half Magic is just as good as Knight’s Castle, by the way, and the kids in that one actually become the parents in KC, which is cool.)

So . . . in case it isn’t clear, I had a great time re-reading Knight’s Castle over the past couple of days. I found it as charming as ever and laughed aloud several times while reading. If you’ve never read anything by Edward Eager, treat yourself! His books should appeal especially to fans of E. Nesbit and/or Jeanne Birdsall’s Penderwick series.