A Valentine’s tea with Margery Sharp

Last month, through the power of BookBub, I discovered Margery Sharp.

Or perhaps I should say rediscovered, for I was a fan of The Rescuers as a child. I had no idea she’d written so many novels for adults until BookBub featured Cluny Brown*.

This charming story features an eccentric and headstrong girl from London who is sent by her uncle into service at an elegant country house. Knowing little of domestic labor in a stately home, she struggles to understand household tasks, class barriers, and unexpected romantic overtures. Passages like this in which Cluny is chatting with potential suitor Mr. Wilson (the local chemist who lives with his nearly catatonic mother) made me giggle:

“Thank you for letting me stay,” said Cluny, blinking.
“Mother’s taken a liking to you,” said Mr. Wilson. “I can see that.”
Cluny wondered how he could tell. Several years before she had made quite a friend of an old man who took a tortoise into Kensington Gardens; and he told her he was never sure whether the tortoise enjoyed these outings or not, whether it didn’t after all think, “Damn this grass.” However, Cluny supposed that from long experience Mr. Wilson could detect in his mother shades of expression, intimations of pleasure, unapparent to any one else.

Cluny Brown was adapted to film in 1946 by Ernst Lubitsch, whose lengthy directing resume also includes my personal favorites The Shop Around the Corner (inspiration for You’ve Got Mail) and the delicious pre-code romp Design for Living (based on the Noel Coward play and featuring an extra-swoony Gary Cooper). I was able to locate the DVD for Cluny Brown, but you can watch it in its entirety on YouTube! Lubitsch took many liberties with the original story, but it all serves to bring the romance into sharper focus AND to feature Charles Boyer, who basically runs away with the film.

*I was struck by the name “Cluny” because I love the Musée de Cluny in Paris, but according to the novel Cluny is short for Clover.

Following Cluny Brown I read The Flowering Thorn (1934), about a Bright Young Thing who impetuously adopts an orphaned boy. She can’t afford to keep him in London, so with the help of an uncle they move to the country. Hijinks ensue, but not in the silly way you might expect. This is a quieter novel than Cluny Brown, and it’s more about our heroine falling in love with a community than a mere man. Currently I am reading Something Light (1960), featuring a plucky dog photographer who is tired of her “Girl Friday” status with the men in her life. She’s ready to marry for money! This book is much more along the quirky lines of Cluny Brown, and I am avoiding all spoilers because I know this novel will surprise me in delightful ways.

And now for our Valentine’s tea, I offer you gluten-free glazed sugar cookies with “Thé des Amants” from Palais des Thés. 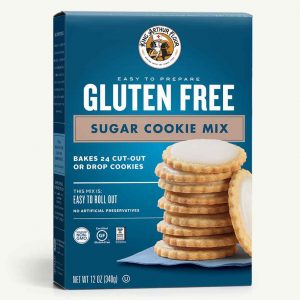 I cheated a little and used this mix from King Arthur Flour, purchased at Whole Foods. (Click here if you’d like to make the cookies from scratch.) I don’t ordinarily keep gluten-free or almond flour around the house, so my trick for rolling out the dough was to put it between two sheets of parchment while still soft, roll it, chill it, and then cut the cookies out. No flour needed at all! And the recipe for the glaze is right on the box. Easy peasy. 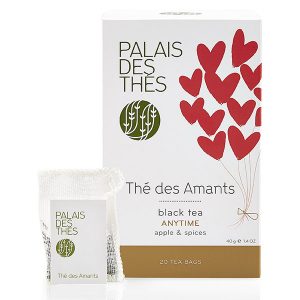 Tea description (from the purveyor): Rich and sensual, Thé des Amants is a heady, fragrant blend of black tea, apple, almond, cinnamon and vanilla, spiced up with a hint of ginger. In French, Thé des Amants means ‘Tea of the Lovers.’ Délicieux! 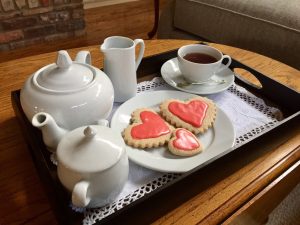 And here is the tea tray!

How about you — any romantic reads or Valentine snacks to recommend?

HAPPY VALENTINE’S DAY TO ALL!