A Horror Interlude for February

This past week I visited Dallas for the Highland Park Literary Festival. The festival volunteers always put on a great event, and the highlight for me was spending time with the HPHS students who signed up for my presentation, “How to Build a Horror Hero” (a companion to last year’s “Building the Perfect Monster”). As you might imagine, I had a splendid time talking horror with these enthusiasts and eagerly scribbled down their recommendations.

They did not steer me wrong! Here are the three films I watched: 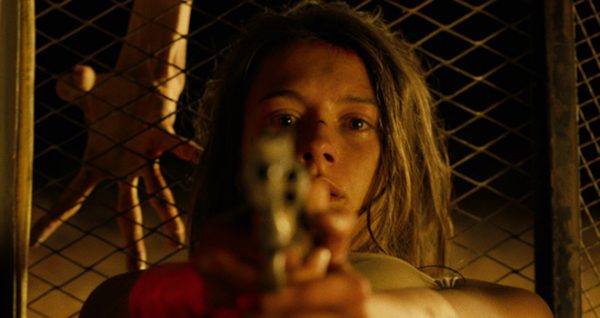 HOSTILE (2017)
Juliette, a lone survivor of an apocalyptic era, fights to survive against hunger, thirst, a broken leg and strange, disturbing creatures that only come out at nighttime.
When a student recommended this one, I’m afraid I confused it with Hostel, which I never want to see. Eventually, however, it got through my thick skull that she was describing something completely different, and I’m just flabbergasted that this film hasn’t shown up on my radar until now. If you like horror with character development, tension, and alternating timelines, give this one a chance.
Watch the Trailer / Options for Viewing

THE THING (1982)
A research team in Antarctica is hunted by a shape-shifting alien that assumes the appearance of its victims.
Why did I wait so long to watch this horror classic? It’s a clever sci-fi variation on the “And Then There were None” sort of mystery, and the old-school special effects (rather than CGI) make it all the more horrific. Kurt Russell is fabulous.
Watch the Trailer / Options for Viewing

CREEP (2004)**
Trapped in a London subway station, a woman who’s being pursued by a potential attacker heads into the unknown labyrinth of tunnels beneath the city’s streets. This one will resonate for those who have spent a lot of time in Tube stations, particularly late at night. Franke Potenta (a favorite of mine since Run Lola Run) is appealing as a “party girl” who ends up locked in the subway station overnight. Guess what? She’s not alone down there.
Watch the Trailer / Options for Viewing

**NOTE: there is a more recent horror film titled Creep with Mark Duplass and Patrick Brice, and it is well-reviewed, but I couldn’t make it to the end because I love Duplass and couldn’t bear him being so annoyingly evil.

Highland Park High School students–thank you for the great discussions and recommendations! Feel free to comment with more. 🙂