For my final “Spooky Films” post, I’m offering some suggestions for family viewing. If you’re new to the blog and have younger children, you might check my 2016 post that includes solidly PG films. If you have tweens and teens interested in watching horror, the following PG/PG-13 options might appeal. Of course, you are the best judge of what your kids can or can’t handle in a scary film.

As usual, all film synopses are from imdb.com. 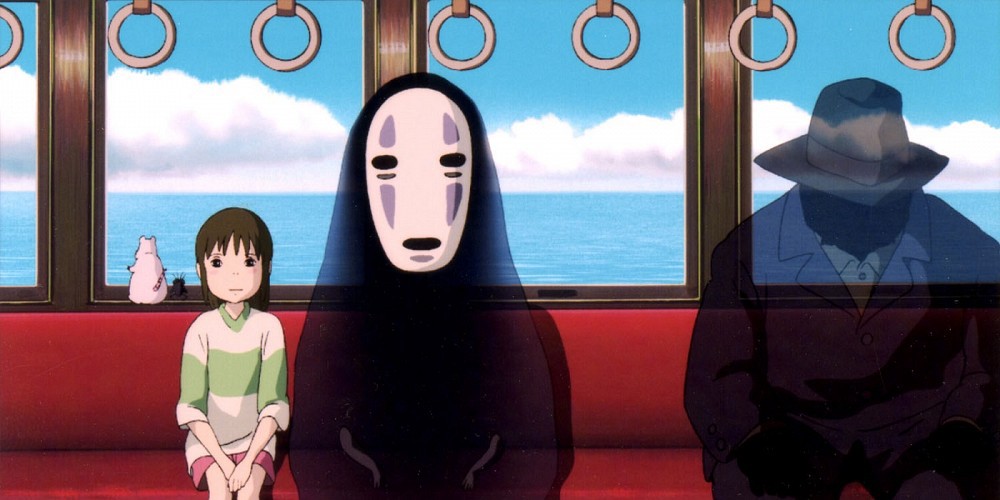 Spirited Away (2001) — Rated PG
During her family’s move to the suburbs, a sullen 10-year-old girl wanders into a world ruled by gods, witches, and spirits, and where humans are changed into beasts.
You’re all probably way ahead of me on this one. I’d heard about it for years but didn’t think it was my sort of thing. Then I watched with a friend and her kiddos. Gosh! Such a lovely, haunting, and spooky film. “No Face” (seen above in the middle) now numbers among my very favorite film characters. Those in the know — are there any other spooky anime films I should track down?
Watch the trailer / available on DVD only (from various retailers) / Metascore: 96
(the highest IMDB metascore of any film I’ve recommended!)
Goth-o-Meter: medium-ish? 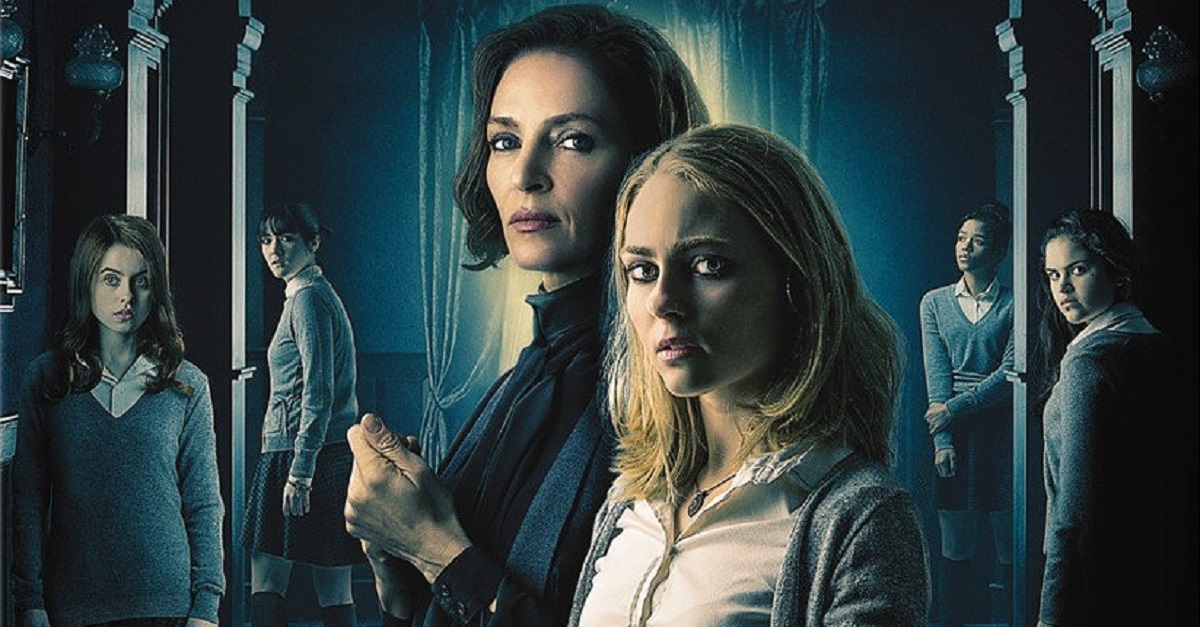 Down a Dark Hall (2018) — PG-13
A troubled teen named Kit Gordy is forced to join the exclusive Blackwood Boarding School, just to find herself trapped by dark forces around its mysterious headmistress, Madame Duret.
This one had me at “all-female boarding school.” Fans of Lois Duncan should get a kick out of it — the setting is properly Gothic and the cast (featuring Uma Thurman with a believable French accent) is strong. The atmosphere oozes with old-fashioned menace, but the students bring a modern edge to the “haunted boarding school” narrative. Lots of drama and even a little romance.
Watch the trailer / options for viewing / Metascore: 56
Goth-o-Meter: high 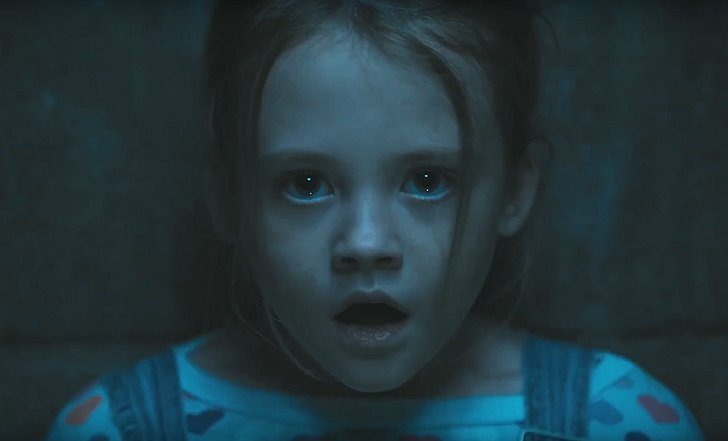 Our House (2018) — PG-13
A young genius accidentally invents a device that amplifies the paranormal activity within his family’s house, possibly bringing back the spirits of loved ones, and unleashing things far worse.
I like a little technology with my ghosts, especially when accidental contact occurs. The pacing in this one isn’t without its problems, but I found the family very appealing and right away I cared about their safety. You might call this a “modern domestic ghost story,” and I like that it offers mystery and chills without going too far with jump scares or violence.
Watch the trailer / options for viewing / Metascore: 45
(the lowest metascore of all my recs, but I really did think this was worth watching!)
Goth-o-Meter: medium to high 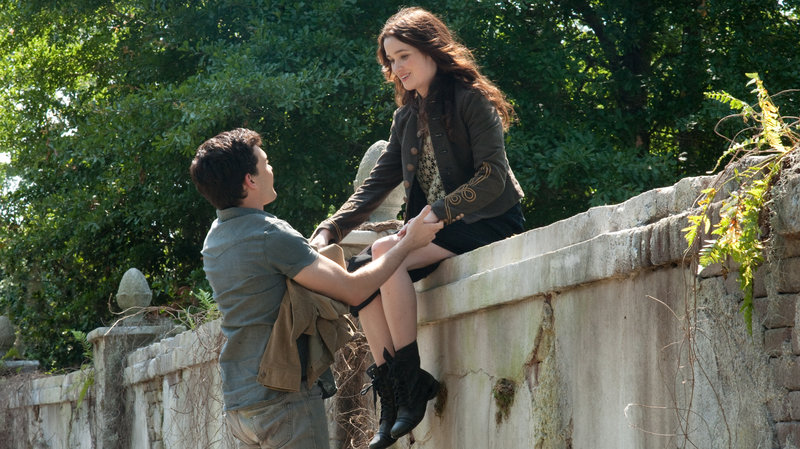 Beautiful Creatures (2013) — PG-13
Ethan longs to escape his small Southern town. He meets a mysterious new girl, Lena. Together, they uncover dark secrets about their respective families, their history and their town.
I read this book when it first came out and quite enjoyed it, but the trailers for the film turned me off. It all just looked waaaay over-the-top. But when I was searching for films to watch this year, this one came up again and again as a strong option. After all, it does have an incredible cast–Jeremy Irons, Viola Davis, Emmy Rossum, Eileen Atkins and Emma Thompson–but it’s Alden Ehrenreich and Alice Englert who make this movie work. If you can get past Ehrenreich’s Forrest Gump-voiceover at the beginning, you’ll see what I mean. They are both sympathetic and have great chemistry together. Yes, there are outrageous moments in this film, but overall I found it intriguing and satisfying — including the (somewhat abrupt) ending.
Watch the trailer / options for viewing / Metascore: 52
Goth-o-Meter: high 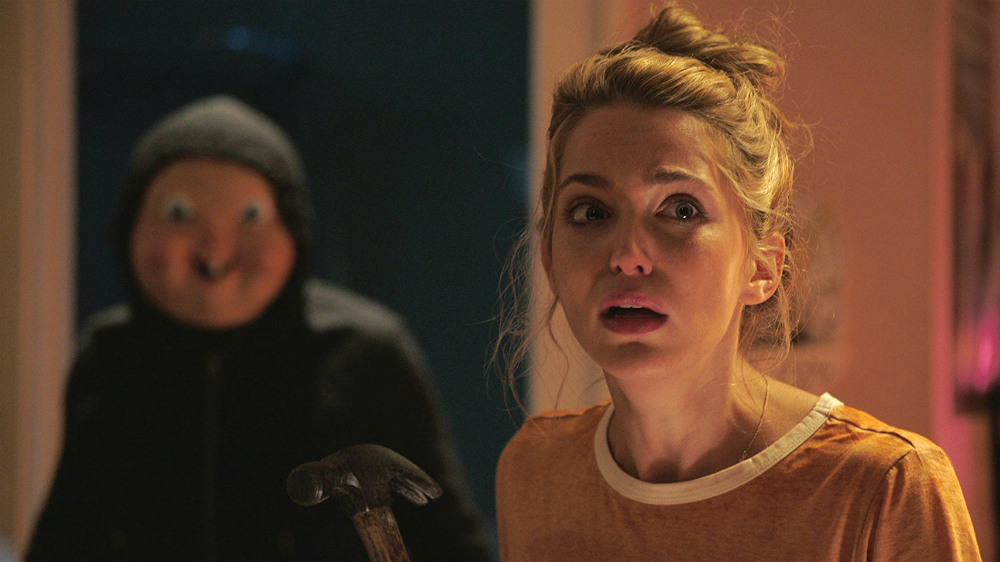 Happy Death Day (2017) — PG-13
A college student must relive the day of her murder over and over again, in a loop that will end only when she discovers her killer’s identity.
As I’ve said before, I don’t enjoy slasher films unless they are quirky and/or funny. This horror spin on Groundhog Day was exactly what I was looking for. I’ve seen it characterized as “relentlessly violent,” but I assure you that there’s not much blood/gore at all, and though the film does get the pulse racing, the tone is playful. It’s along the lines of the SCREAM movies, but with much less blood.
Watch the trailer / options for viewing / Metascore: 57
Goth-o-Meter: low

Here’s a list of other PG-13 Horror options, though I’m kind of horrified that The Ring is included. That one really got to me–I enjoyed it, but it’s more at the “disturbing” end of the spooky continuum. There are moments in that film I wish I could unsee.

Also keep in mind that two of the films mentioned earlier in my 2018 recs are PG-13 — A Quiet Place and Jurassic World: Fallen Kingdom. The Endless is unrated, but I think it would be appropriate for teens and mature tweens.

That’s it for 2018, folks! Happy Horror Viewing and REMEMBER, if at any point you wish to browse previous spooky film recs (going all the way back to 2012), click the tag “spooky film recs” in the list below–or in the sidebar–and scroll to your heart’s content.

← Previous post: 2018 Spooky Film Recs, Part III: Ghost-free Horror Next post: Tea and a Book and a GIVEAWAY for Thanksgiving: A Long Way from Verona →